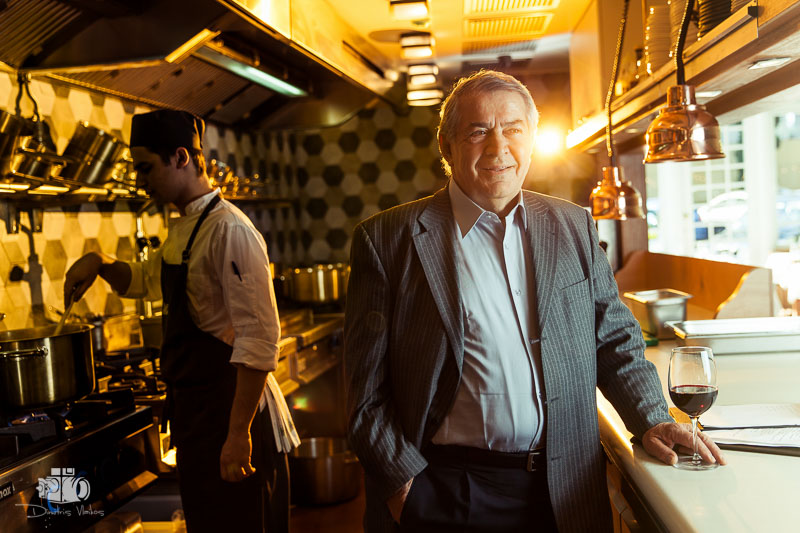 Photoshoot of the Greek Chef Nikos Sarantos in Athens

Mr Nikos Sarantos is one of the most significant Greek chefs. Twenty years ago he was the one that founded the Greek Chefs Club and spread Greek gastronomy in all over the world. He is not only a tal...
M

Mr Nikos Sarantos is one of the most significant Greek chefs. Twenty years ago he was the one that founded the Greek Chefs Club and spread Greek gastronomy in all over the world. He is not only a talented Greek chef but also a chef with vision and passion for giving to the Greek Cuisine and taste the best it deserves. Before I meet him the truth is that I didn’t know much for him and for his personality. Our meeting point and photoshoot place was Cookoovaya Restaurant in the center of Athens. When Mr Sarantos came in, I realised how important and great he is for the gastronomy industry of Greece, in the way that the chefs of Cookoovaya restaurant behave and speak to him.

The photoshoot location of Cookoovaya restaurant in Athens wasn’t the easiest place could be. The chefs were doing the preparation for the opening and the natural light was to bright for the mood I wanted to give to the pictures. I feel boring to see chefs photos with kitchen tools in their hands in their suit. In this portrait photoshoot in Athens, I wanted to present the Greek chef Mr Nikos Sarantos as a famed and master chef standing out of the crowd. To make this shot I put him close to another young chef who were making the preparation. It was a good way to show the contrast of the beginning of the past mirrored to the present of the successful career of Mr Nikos Sarantos. The second photo of the photoshoot was siting as a customer in front of a minimal background, waiting to serve him and taste and maybe enjoy the dish cause itsalso known that Me Nikos Sarantos is a bit severe with tastes! The photoshoot of the Greek Chef  Nikos Sarantos was for his Interview in Gastronomos Magazine of Kathimerini. Working in Athens as a portrait photographer and meeting and working with important people and great Greeks like Nikos Sarantos is one of the thinks I love in my job!

Photoshoot of the Most Traveled Man of the World!